Nature Study and Coloring Case out of DVD cases

Once again Pinterest led me to this awesome craft for the kids.  Here is the original post.  What a great use for all those dvd cases (apparently we have been throwing them out but we found enough for the project [and two mistakes]).  We made a few changes, although I loved her original idea!  First, it is next to impossible to find colored pencils around the house, so I made two pockets for two rows of crayons (which we have tons of!).  Then we simply decided to put the pocket on the other side.  Here's what we came up with: 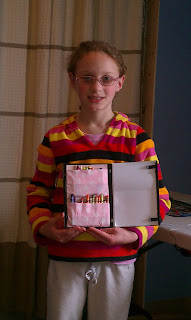 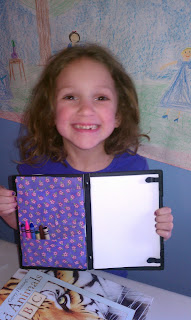 First, cut out the part that holds the dvd, make sure to put the self healing mat between the clear plastic and the case

Then "measure" a thin piece of cardboard to go in that space (this is where the crayons or pencils will be), for this one I used the top of a shoe box for the cardboard.  Cut a second for the side between the case and the plastic cover.

Here is that neat little hem I was talking about

We put down crayons to see how many would fit and how much fabric we would need.  Then marked it... with pen... on the front (did I learn NOTHING from my 7th grade sewing class?!).  Needless to say, it would of been smarter to make the markings on the BACK of the fabric!

Top pocket, measure a hem at the bottom (nice and even, isn't it - geesh!).

Now the fun part!  Spray glue!  I did this on the steps outside.

That silly hem - I masked it off with a page from a magazine and sprayed the hem to make it even (from the front at least).

Bottom pocket!!!  Oh, I just realized that I didn't take any pictures of me covering the cardboard, anyway, same principle... "measure" and glue.

Repeat with top pocket and ta-da!

This is the back.

Here it is in the dvd case.

Here is her cover.

2nd one... out of shoe box top, so beer box was a good alternative.

This time I made fancy corners.

I don't know why... it didn't change anything.

I used a LOT of glue... apparently I got some on my finger... which then got stuck to the sprayer thingy (technical term), which then came off.  Thank goodness my voice wasn't being recorded, I had some choice words right about now.

Finished!  I *love* this one!  I think the small dark print looks awesome!

Cutie putting her crayons in.
Thanks Stacy for the original post and inspiration!
The girls wanted to make a dozen more... perhaps some day.  I think this would be great for a "nature study" with the kids.  I think before we start school in the fall I'll make them all one and fill it with new pencils. I also think it would be a cool gift for people that come to visit us with kids... for the trip home.  Or perhaps for kids that draw/color in church... the ideas are endless!
Posted by Brenda Chryst at 8:29 AM