My youngest daughter (5) has been having a hard time going to sleep.  UGH!  As a stay-at-home mom bedtime is something I look forward to after a long day and the last thing I want to do is end the day on a bad note.  She was getting up saying "I can't sleep", "I'm lonely", "I'm bored" all within the first five minutes of putting her down.  (Of course my favorite was when she said "dad puts me to bed sloppy" and explained that he didn't do all the hugs and kisses and quick stories and whatever else to make bedtime last a few minutes longer.)

She is a great story teller so one night I decided to give her three things to think about to help her fall asleep.  I think it was something like "puppies, rainbows and fairies"; she was thrilled!  We've been doing this for a few nights and I am sort of hoping that her "sloppy father" (tehe!) can help with bedtime again and perhaps a sitter (gasp).  So I came up with a "Dream Jar"!  I would find a jar and put some ideas for her to think or "dream" about.

Attempt One:
Glitter!!!  Kind of like "pixie dust" filled with papers.  So, I gathered some tools - an old clean jar, glitter (purple of course) and some spray adhesive. 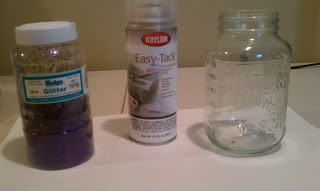 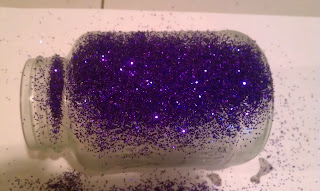 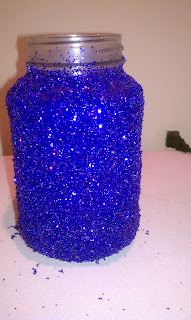 Oh the mess!
I should mention that my husband *hates* glitter, Easter grass and packing peanuts.  Typically they aren't aloud in the house, but I had a glitter stash in case of such an emergency - shhhh.
I quickly realized that I couldn't touch the jar without being coated with the stuff.  Then I thought of what her bedroom would look like... and how this would "effect my marriage".  I then spent the next 20 minutes or so trying to wash the glitter off the jar, the table, the floor, my hands - it wasn't pretty! - Attempt One = Fail!
Attempt Two:
I needed a new jar.  The one I used was still covered with glue and I was running out of time.  I used to scrapbook (okay, only for a year and only for my first child) and have some (TONS) of stickers left over.  I spelled out the word "dream", added some stars, hearts, and boarder stickers (in an attempt to hide our buddy "Mr. Peanut").
I took an 8 1/2 x 11 sheet of purple paper and wrote down girlie words like "fairy", "balloons", "flowers" and "ballerina" in pretty script - 10 down and 2 across then cut the paper into strips and curled them around a pencil.
I love this!!  She loves it!  After our story and prayers she picked out three strips of paper and I read them (did I mention that there was no reason for me to write the words in pretty script because she can't read - duh!).  She was thrilled!  There were tons of hugs and thank you's.
Attempt Two = Success!! 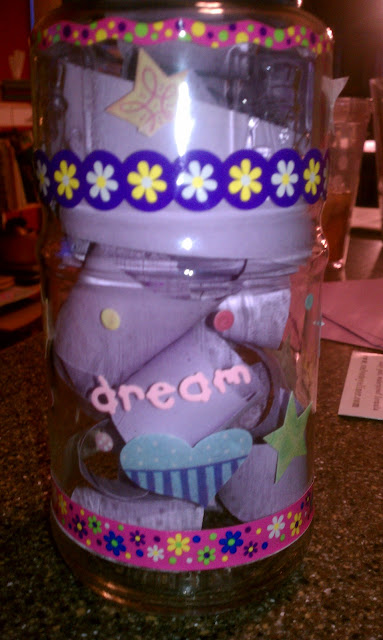 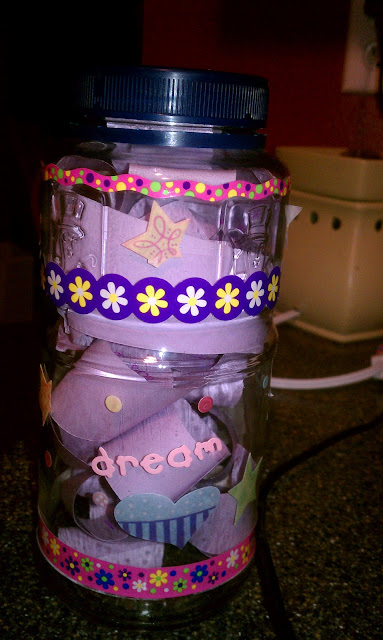 Posted by Brenda Chryst at 7:26 PM